Well it’s currently 4am here in India. It’s been a crazy past few days, but I am so grateful to be apart of the Lord’s ministry like this. Last week I had the opportunity to go with an amazing team to San Pedro Sula, Honduras. Half of the team was already there the week before doing a training conference with pastors and other people of the community wanting to learn how to make disciples. When the other half of the team and I arrived in San Pedro Sula, we heard story after story about what God had already done that week. I was so excited to finally be there!!

This was not exactly a “mission trip.” It was a training trip for the people of Southwest Honduras as well as for the members of our team. Our team leader, Zach Medlock, made sure we knew that we were not the rescuers, but the rescued. There’s a quote that I absolutely love that says, “We’re just poor people trying to tell other poor people where the bread is at.” And that is so true for any mission trip. The people going on mission are

in no way above the people already there.. we all have a desperate need for Jesus.

When I got to Honduras with 4 other people, and we met up with the rest of the team, we went into the village of Potrero Grande where we stayed for the rest of the week. We had to climb up a mountain to get to the village. Those who have been there before kept calling it the “Honduran jungle of doom” and telling us our legs were going to feel like jelly half way up which intimidated the rest of us.. But it was not a bad hike at all. We took plenty of rest breaks along the way and enjoyed talking with each other and looking at the gorgeous view throughout the hike!

To get to the other side of the river in order to hike the mountain, we had to cross this bridge that was just built by the locals.. I’m not one to get scared of heights, but I definitely was! We had to cross over on a piece of cement that was only about 8 inches wide.

Sooo sketch.. but totally fascinating that they were able to build this!

Although I was completely stoked about backpacking the mountains of Honduras, the horses carried the girls bags… Bummer…. 😉 So thankful for this little guy! It was so heavy!

Of course we had to stop at all of the pretty spots (which were EVERYWHERE) and take pictures! Love my girls Cal & BreeBree! 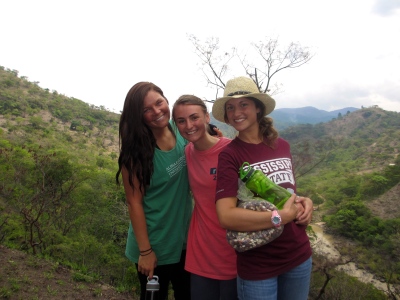 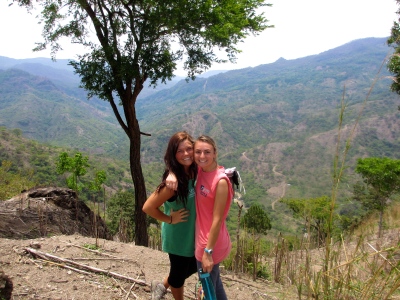 This was around the halfway point.. of course with the mountain man himself. We started out at that little river. SO gorgeous. 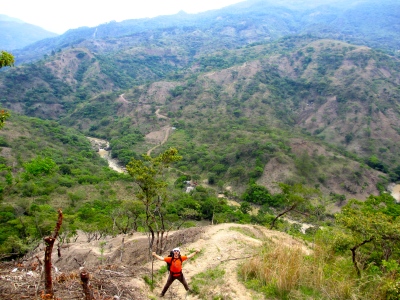 After arriving at the village & celebrating our hike, the girls decided we’d put our packs on (to look legit) and take another picture 😛 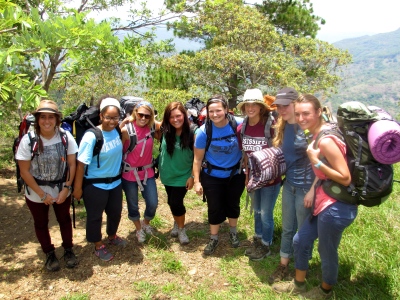 That day was so much fun!! I developed an even bigger love for mountain climbing/ hiking and a new love for horses that allowed me enjoy it even more without my bag on my back!

Each morning started off with children’s ministry. Calley & I told them a bible story & then we played games with them. The 1st morning we told them the story of Zaccheas & explained to them that Jesus loves sinners.. that no matter what they’ve done or will do, Jesus has already forgiven them & He (the creator of the whole universe) LONGS for a relationship with each one of them. The 2nd morning we wanted to share the Gospel with them, so we told the story of the lost sheep & told them the Gospel from creation to Christ’s death & resurrection. And again we reminded them that when even just one of God’s children are far from him, it breaks His heart. He is constantly pursuing each & every one of us because He loves us so much, & just like in the story of the lost sheep, when we come back to God, he is not angry or bitter or filled with guilt & condemnation, He is full of GRACE & rejoices!!

The next day we explained to them that if they believed the Gospel their response now is to share it with everyone & make other disciples of Jesus (the Great Commission). We explained what that might look like for them. It was really hard to hold discussions with the kids during this time because I’m not fluent in Spanish, but thankfully we had translators who the kids were close to. We had so much fun in the mornings with the kids! Such a great way to start off each day! 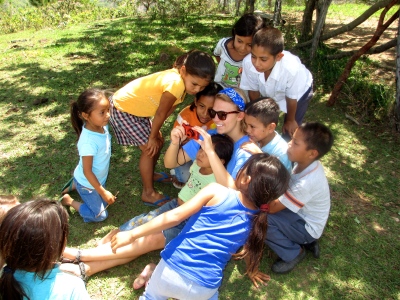 They LOVED playing this “teacup” game.. we would pick them up by their arms which were under their legs and run with them.. Some were not so easy… 😉 Love this fun picture of sweet Kim & Ainsley! The kids absolutely adored them!

We taught them duck, duck, goose 🙂 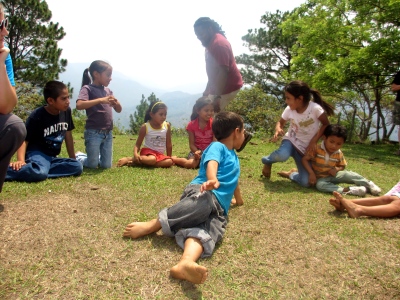 One of my favorite parts of the entire trip was just the community of other believers who followed hard after God and had the same desire & urgency to make much of Jesus in this short life. Our team was just absolutely amazing. I only knew 3 people going before I got there. There were 18 people from 10 different states! Most of us only knew 2 or 3 people before we met everyone in Honduras. It was so great to immediately be unified with these people because of our union with Christ. LOVE these people.

It was so sweet to be able to have the opportunity to spend this time in Honduras with one of my best friends, Calley. The Lord has completely redeemed and transformed our friendship to glorify Himself, and it’s one of the things I am most thankful for in life & have seen Jesus the most in. I’m really grateful to have a friend like her who encourages me by her friendship & her walk with the Lord. 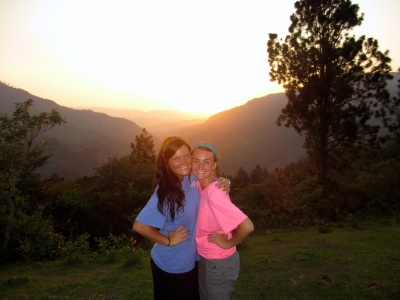 One of my other good friends, Bree, was able to be there as well, and I seriously could not have been more stoked that we were going together!! I’m so so thankful for her friendship over the years, and really glad that the Lord has made us such close friends! We had such a great time in Honduras, and one of my favorite parts of the trip was my talks with her! Absolutely adore this girl! 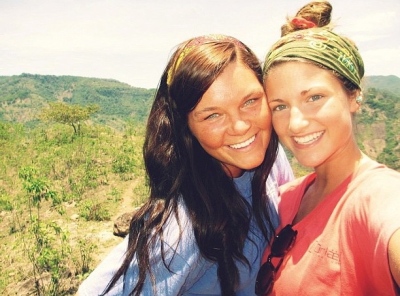 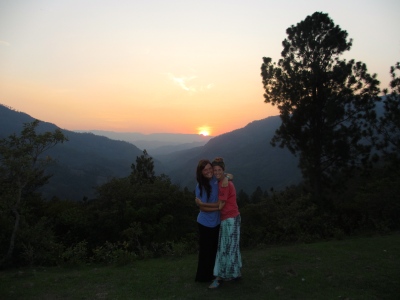 So many sweet friendships were made this week with people from all over the country. My heart is filled with joy!

This was the sweet family we worked with, (the pastor of the village church & president of IMB), and our team leader, Zach.

We had lots & lots of fun memories made.. including this not so fun HUGE Honduran Demon Spider (okay, so we gave it that name..). Yeah, we slept with these things. 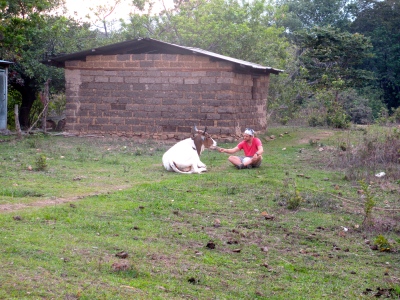 Saying goodbye to the people in Potrero Grande was so sad, but I know I will see them again soon! I loved being here so much!

We prayed with the whole team and people of the Potrero Grande the morning we left.

For 2 years, the team that has been going to Potrero Grande have been praying for a man named Walter. He has much influence in the village. At the beginning of the week, our team shared a few of our testimonies and the Gospel multiple times with this man. He said that we wanted to follow God and He knew that he needed to, but every time he wanted to, there was something holding him back. He said that there were voices telling him not to. The last night we were there, Walter decided to follow Jesus!! This is HUGE! Not only for his personal life, but also for that entire village. I’m SO thankful for the Lord’s sovereignty and perfect timing displayed in this. I’m STOKED for this man’s new life in Christ, and I cannot wait to see how the Lord uses Walter for His glory in Potrero Grande!

The morning we left, Walter hiked down the mountain with us so that he could be baptized in the river. SO exciting!

Like I said, these 2 weeks were for training. The first week there was 26 hours of teaching, and the second week there was around 12 hours of teaching. This trip was 50% learning and 50% ministry & evangelism. Zach Medlock & Ron Surgeon taught T4T (Training for Trainers). It’s a process of targeting, developing, and training groups that multiply. It’s just a way to show you how to share the Gospel, how to disciple, how to develop leaders, and how to facilitate & multiply churches & small groups.

My whole paradigm was changed this week. Entirely. We went into deep study of the Great Commission. Some of the stuff we learned, I have “known” for such a long time, but

it never sank in I guess. I never have really understood in detail what Jesus really meant when He said that “All authority in heaven and on earth has been given to me. Therefore go and make disciples of all nations, baptizing them in the name of the Father and of the Son and of the Holy Spirit, and teaching them to obey everything I have commanded you” There was a lot of time spent on those words, and I wish so badly I could just write every single thing I learned this week.. But to sum it up just a little, I realized that there are only 2 types of people in the world (and this is how I should view them) either lost or saved. Period. And if they are lost then they need good evangelism. If they are saved, then they need good training. Viewing people this way is just seeing people how Jesus does. My prayer since this trip is that I would have such an urgency for other people to know Jesus that all I see is the condition of their soul.. if they’re close to or far from God.

This week was just incredible. Seriously. It was one of the sweetest times for me ever spent in a different country. The Lord did a lot in my own heart. A lot of confusion & brokenness, a lot of conviction, a lot of encouragement, a lot of redemption. All in such a short amount of time. Just a whole lot of truth was given to me this week that either I’ve never heard before or maybe I just haven’t understood it. I learned so much, but more than just gaining knowledge, which means nothing alone, I have the process and the paradigm to make much of Jesus like never before. I’m excited about making disciples and training people who train others who train others and so on.. And by God’s grace, it will never stop. This is my prayer, for each of the people on the Honduras team as well as myself. And also for every follower of Jesus.. that they would see that Jesus was serious when He said to make disciples.. That it’s not a “calling” for some followers of Christ and not for others. It’s a command. For everyone who follows Christ. My prayer is also that I would not get caught up in this process or even the mission but that I would just be so caught up in Jesus Himself.